Captain America Panhead Chopper Sold at Auction For Over $1.6 Million. Real of Fake?

Captain America Panhead Chopper Sold at Auction For Over $1.6 Million. Real of Fake?

There are serious questions about if it is real or a reproduction. But what might or might not be the last remaining ‘Captain America’ chopper from the 1969 movie “Easy Rider” sold at auction Saturday night for $1.35 million.

This motorcycle was on display at the National Motorcycle Museum. and was auctioned. Is it a real one from the movie Easy Rider or a fake?

According to the LA Times, with auction fees, the final cost was more than $1.6 million. 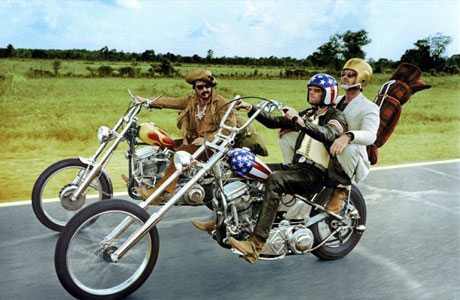 This is on of the real Captain America choppers. Was a real of fake one just auctioned for more than $1.6 million?

The chopper, ridden by the film’s star and producer Peter Fonda in the landmark counterculture film, is believed to be the last of the four choppers built for the film.

The purchaser of the bike,  put up for auction by Los Angeles realtor and movie memorabilia collector Michael Eisenberg, was not identified.

Many question the authenticity of this customized Harley Panhead, Eisenberg said that he became convinced it was the last remaining  “Easy Rider” motorcycle by actor Dan Haggerty, best known for his role on television as ‘Grizzly Adams.’

Haggerty had a bit part in the movie and helped work on the four motorcycles used in the film. According to Haggerty, the other three choppers were either stolen or sold for parts prior to the film’s release. Haggerty claims he helped rebuild the auctioned off bike from the wreckage of the fourth bike which was nearly destroyed while filming the film’s finale.

According to the auction house the bidding began at $1 million and within minutes rose to the final sale price of $1.35 million (plus commission). What do you think – real of fake? And what’s it worth if it is real?